The power of feedback and more changes! plus PTD3 Mystery Gift!


The power of feedback

So last week I released the first prototype for you to play with and take a look at how my initial ideas for Cosmoids TD have been taking shape. While I didn't get a huge amount of feedback, I did get some key ones that will actually impact and change the game.

The change I'm going to make is that instead of having your Avatar have to go to spots to place the cosmoids. The cosmoids will instead go from the Avatar to their spots. So the speed at which your units will move to and from spots will always be based on your cosmoids speed. This always allows you to quickly place your units on the map, instead of having to wait for your avatar.

However, even though your avatar will no longer be moving to place cosmoids I still plan to have your avatar move for things like healing or buffing your cosmoids.

Lately I've been focusing on how Cosmoids TD will be different from the PTD series. It's a mix of seeing what worked and what didn't work for PTD in my eyes and trying to change things up to make them more interested or require a little more planning. One of the first changes I thought about was about how your Cosmoids will level up.

First a small history lesson, in PTD1 your towers would gain experience by battling, very similar to the original Pokemon games. Your tower had to be a part of the battle for it to gain experience. Once they gathered enough experience you could use your PokeDollars to level them up. This was pretty interesting to me because it made you have to make a choice in which tower you wanted to level up first. However as you played the game, the amount of dollars you got was so high that leveling up was no longer a problem and so there was no longer a choice.

So much so that in PTD2 and 3 I no longer had leveling up cost anything. Looking back I think Tower Defense games are very much about choosing what you do with your resources so this is something that I want to bring back for Cosmoids, with a twist.

My current idea is that when you defeat an enemy cosmoid you will earn what I'm calling "Meteor Dust", this dust is essentially your resource to do many things in the game including leveling up.

The change is that your Cosmoids doesn't have to see battle to level up, you can simple "give" it some Meteor Dust to make them level up. So you will still be battling to get dust and then once you have enough to level up your Cosmoids the game will let you know and then you can make your choice whether you want to use it to level up or to purchase an item etc. You can also choose which of your Cosmoids will get the dust. The challenge will be to keep the dust as a somewhat more limited resource compared to PTD1 where money was plentiful after a certain point in the game removing any choice.

As I'm designing Cosmoids I'm going through all the areas of PTD and seeing what I want to change and what I want to keep the same. So lately I've been looking at Attacks. In PTD your towers have 4 attacks to mirror what exist on the pokemon games. For Cosmoids I may be rethinking this, some of the ideas I have are towards lowering the amount of attack switching that can currently exist in the PTD series and focus more on interactive active attacks similar to Champions! The Last Defense, where you would have a more active role in attacking your waves.

As with everything, the design can change and evolve over time when creating a game so these can be subject to change.

For PTD3 while I'm no longer developing new content for it, like new levels etc. I will still be doing mystery gifts as I can do those relatively quickly.

This week's Mystery Gift is... Qwilfish! 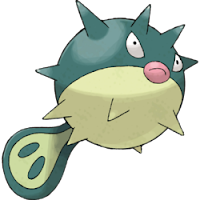 I still have plenty of task for the Prototype v2, I've added the change in Tower placement as part of my list. You can play v1 of the Prototype by clicking here.

As always let me know what you think in the comments below or email me at sam@sndgames.com or on my twitter!

Thanks for your support, and see you next week!
attacks cosmoids td feedback leveling up Mystery Gift ptd3 Qwilfish